Living up to one of his avowed promises to do everything humanly possible at sustaining the cultural heritage and traditional history of Yoruba land, the Ooni of Ife, His Imperial.

Princess Foluke’s team, which consist of a cultural troupe, dancing band and a theatre company, each of which performed to the satisfaction of the Ooni disclosed that members of her delegation were drawn from Youth In Focus Initiative, YIFI, an NGO which she formed to purposely offer a platform for youth interaction for culture education, sustainable empowerment, job creation and networking, talents hunt, educational advancement and vocational upliftment, planted and has offices in 26 states of Nigeria and with over 2 million members.

‌Princess Ogunlowo. said that her commitment to uplifting, protecting, preserving and showcasing African Arts, Culture and Values ( believing that arts, culture and values in Africa stem from ile- Ife) is what she cannot just explain.

‌” Kabiyesi, I must confess that I can not explain the forces propelling and fanning the embers of Yoruba cultural rejuvenation in me right from my youth. I just have this constant feeling, ever-present in me that I should consecrate myself to promoting the pristine culture, values, history, heritage and mores of the Yoruba race. That I should create a village there in Ife Oke, the Stead of Olofin, where this generation and generation yet unborn will be able to authenticate their forefathers’ cultural and traditional glorious past ‘. 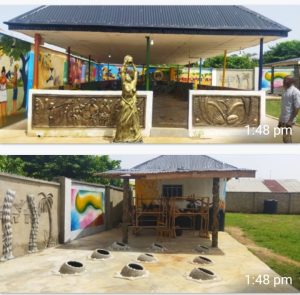 ‌She revealed that ” Kabiyesi, I have watched, probed, analysed and profiled your utterances, acts, deeds, body language, and analysed your mission par vision since your enthronment, and I summed up that Oduduwa Atewonro has come back to resuscitate the dying, comatose traditional identity and the values that distinguished the Yoruba from other races and make them who they are”.
‌
‌Princess Foluke Ogunlowo said that the Ooni’s strides at revamping the culture, tradition and art sector of Yorubaland have served as a motivator and inspirational spell on some of them.
‌
‌” Kabiyesi, in no distance time, I will be here to warmly invite you to the inauguration of the Foluke African Centre for Arts and Culture, Atosin, Idanre, Ondo State. It is a cultural community which will house a Museum of Yoruba cultural items, values and heritage and a cultural commune which will be Yoruba in concept, presentation and taste”.
‌
‌The Ooni who was visibly impressed posed some questions to Princess Foluke Ogunlowo, who responded brilliantly and culturally to each question asked by the Kabiyesi.

Extremely satisfied with the activities and cultural roles being played by Princess Foluke Ogunlowo, Ooni Ogunwusi prayed earnestly for her and assured her of his unlimited support.

” I am profoundly happy with you. And I am sure the founder of the Yoruba race whose culture they bequeathed upon us which you are adding value to will add bumper value to you in all of your endeavours. Bountiful fortunes, unlimited favour, and doors of wealth will open for you. And let me assure you that in me you have gotten, a father, a propeller of your vision, a financier and an agrarian supporter of your passion. I am ready to commit as much to the place as it will be a worthy trans-generational cultural project . Count on me and I will be there for you.”