Christians across the world has been urged to be true solders of Christ both in words and deeds in the society.

Addressing the congregation during the official inauguration and swearing-in ceremony of the new state executives of Christian Associations of Nigeria (CAN), Ekiti State Branch held at First Baptist Church, Okeyinmi in Ado-Ekiti, the state capital, the CAN chairman, Rev. Dr. Emmanuel Adeyinka Aribasoye said Christians should not take their beliefs and faith in Christ Jesus with levit hands but to be true solders for their Maker who sent them to world.

The cleric in his homily, enjoined congregation to see the event as a beginning of a journey in faith and total commitment to God their Creator even as he urged them to be true solders of Christ in all their dealings.

Dr Aribasoye, admonished them to depend solely on God regardless of the changing situations of life, noting that things of the world are ephemeral which doesn’t last.

He observed that CAN as a body has not be giving accorded recognition it deserves by the government in the state. “The Church was not united, it has been marginalized, but weed to come together and speak with one voice for us to move mountains”.

The religious leader was hoping that the country would overcome the present insecurity challenges ravaging the land, adding that Christians should not relent in offering their prayers to God daily to heal our land in totality.

While summarizing his thought provoking acceptance speech, the new CAN Chairman ended with an insightful message in what he tittled; “The Birth of Newness”.

“The end of an era, birth of new one. Today, a new era of leadership of this great body, Ekiti State CAN is unfolding. Newness is a reality of of presenting originality, restructuring, inventiveness and remodification of the existing structure to pave way for more inclusive coexistence of the member body of Church culminating into CAN in Ekiti State.

He pledged his readiness and desire to take Ekiti CAN to the next level of greatness. “It is my desire to embrace and offer newness in all areas of life of CAN. Newness of purpose; newness of mission exhibitions and accomplishment; newness in leadership-followership relationship; newness in our cooperative programs and relational coexistence with members bodies and affiliated bodies like the Bible Society of Nigeria and the likes. Newness in for reorientation of Christians in societal inclusiveness; newness in officers’ approach to work; and newness in all areas where applicable and areas where God desires and enables”.

According to him, Rev. Aribasoye who also doubled as the Conference President of the Ekiti Baptist Conference highlighted the propose six-cardinal areas of newness of his administration as the newly inaugurated CAN Chairman which include: “Newness of Oneness; Newness of Participation; Newness in Prayer; Newness of Influence; Newness in Church Discipline; and Newness of Physical Development”.P

In a separate interview with The Dispatch Newspaper shortly after the event, the National Director of Eccomenical Relations for the Nigerian Baptist Convention, Rev. Dr Testimony Oyewole Onifade described the ceremony has a confirmation of the confidence repose in the Nigerian Baptist Convention product, noting that wherever you see any Baptist minister serving, they are so amazing, wonderful, hardworking, diligent, faithful and can be trusted in any leadership positions.

“Thank God for the lives of CAN body in Ekiti State for making it possible to have thought of one of us in Baptist circle to become the CAN chairman in the state. I’m trusting God in His wisdom that Rev. Aribasoye will succeed on the task ahead of him because his anticident is a something we can rely upon. He’s a leader with character plus humility who as send of responsibility and a christian stewardship indeed that has been tested and trusted on many occasions.”

Rev. Onifade urged CAN body to cooperate with the new leader for success. “Leadership is not by age but by God’s choice. They should cooperate with him and accept him as leader and they should be praying for him alongside other executive members and agreed together in Christ Jesus who’s the key that bond us together as one entity.”

The historical event was made colourful with superlative performance by the Royal Ambassadors couple with the Baptist mass Choirs who enliven the sanctuary with soulful tunes to the admiration of the visiting clerics from outside the state as well as other personalities who graced the occasion.

Guests were welcomed with a rousing greetings by the enthusiastic worshipers amidst reverence and infectious serenade in honour of the august visitors.

The newly inaugurated executives that will pillot the affairs of CAN in Ekiti for the next five years include Rev. Dr. Emmanuel Adeyinka Aribasoye as the Chairman; Pastor Joseph Olubusoye​​ emerged the Vice Chairman; Evangelizer David Fabusuyi as the Secretary; Rev. D. F. Adebayo as the Assistance Secretary; Primate Dr. Olorunleke Abe emerged as the Treasurer; Rev. E.O. Babare​​​ as the Financial Secretary; while Lady Toyin Henrrietta Jegede became the Auditor 1 and Pastor Tunji AinAina as Auditor 2. 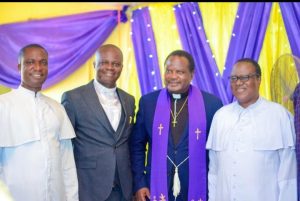 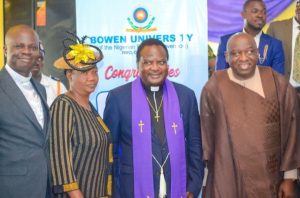 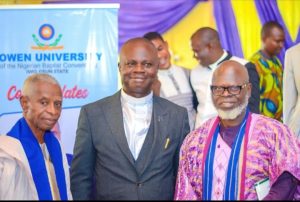 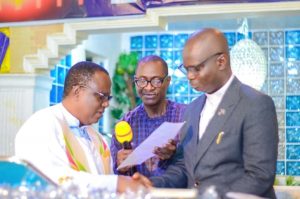 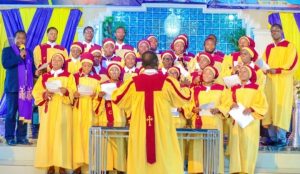 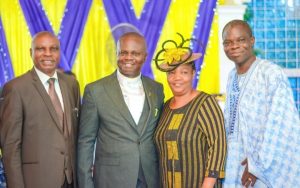 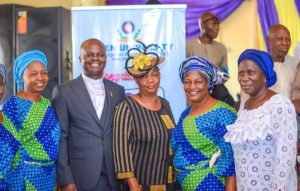 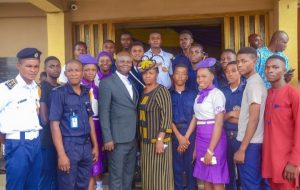