Ibironke Olasunmbo Ohunoluwa a.k.a Yeye Omigbemileke is one of the few educated traditional religion worshippers we have in Yorubaland. In this interview with TheDispatch Online, she spoke about the importance of ‘Heavenly Mates’ known as ‘Egbe’ and ‘Mariners’ known as ‘Omo Omi’ in Yoruba Language. She also talked about other areas concerning our culture and tradition in Yorubaland. A cerebral Olorisa also spoke on the challenges of being a female in a profession dominated mostly by males.

My name is Ibironke Olasunmbo Ohunoluwa, popularly called Yeye Omigbemileke. I’m a graduate of University of Lagos. I work as Yeye Osun and I’m from Efon Alaaye in Ekiti state. I live in Sango Ota area of Ogun state. I’m the first child of my parent. I’m not just Yeye Osun, I’m basically Olorisa.

Can You Tell Us Your Interest And Knowledge Of Ifa And Other Orisa Worship?

My interest and knowledge of Ifa and Orisa worship is basically from my background.  I inherited it from my grandfather and my father who were both Babalawos. I grew up in that environment. As a first child who happened to be a female, my father never hide anything from me. He was always teaching me things. Whenever they are chanting Ifa, I would be there. Also when other Babalawos were around I would be there to see what they were doing. Also when they were going to ‘Ode Ifa’, I would be there too. My father had always told me from day one that it was my line. But he wanted me to get educated. And I was always interested in it. I saw important and influential people that usually came to see my father. I saw many coming with tears and leaving with smile on their faces. That was the beginning of my knowledge of Ifa. When I finished my secondary school, I proceeded to Lagos State College of Education, Adeniran Ogunsanya before going to the University. Then I majored in English and Yoruba. The Yoruba courses were very interesting then. We did a lot of things on Ifa and Odu Ifa. We did a lot on Ayajos, Ifa verse and Orisa practice. The traditional culture and religion are interwoven. Although, I had been going to church then, they gave us the impression that what we believed in then was dark and that it was only in the Church that we could have light. That time, I was attending Deeper Life Campus Fellowship. I was seeing everything they were doing; I lost interest in my inheritance. We were going to churches. And after my graduation, I was going to churches. Even then, my knowledge of Ifa was actually established. And when I eventually gained admission to University, I was offered English Education and my minor naturally was Yoruba. And in those Yoruba courses, we also encounter a lot of Ifa and Orisa and somehow, a solid foundation was laid in me. Just like, I have said, I have gone to churches. I later became a Prophetess in Cherubim and Seraphim church. Those who understand some basic facts know that Cherubim and Seraphim church is not completely against the use herbs and a lot of traditional practices.

You Are A Woman In The Field Believed To Be For Men Only. Can You Tell Us Your Experience?

Yes, it is true I’m a woman in the field which is believed to be for men alone. Well, there are lots of women in the field now. But the truth is that, it is not easy to be a woman in a man’s world in which you have to compete. Some of them will accept you and embrace you; while some men will not. I try to look closely and if you are someone I should get close with, I follow my intuition and if you are not all the same I follow my intuition. However, due to my prominent activities in traditional group online; a lot of people took interest in me. Even a lot of men old enough to be my father and who have more experience because of my sincerity, my openness follow me. I humbly accept them into my life but being in a man’s world to be honest with you is not easy. Some men are hard despite your efforts and it is not that they are not seeing your efforts or benefit from it; they just don’t want you there. And you know that naturally our environment and culture usually restrict women from doing certain things. Except for some of us that refused to be restricted. So there is no big deal in it; it is only a matter of who to flow with or who to disengage yourself from.

There Are Many Orisas In Yoruba Culture. Which Of The Orisas Are You Conversant With And Do You Worship Such? 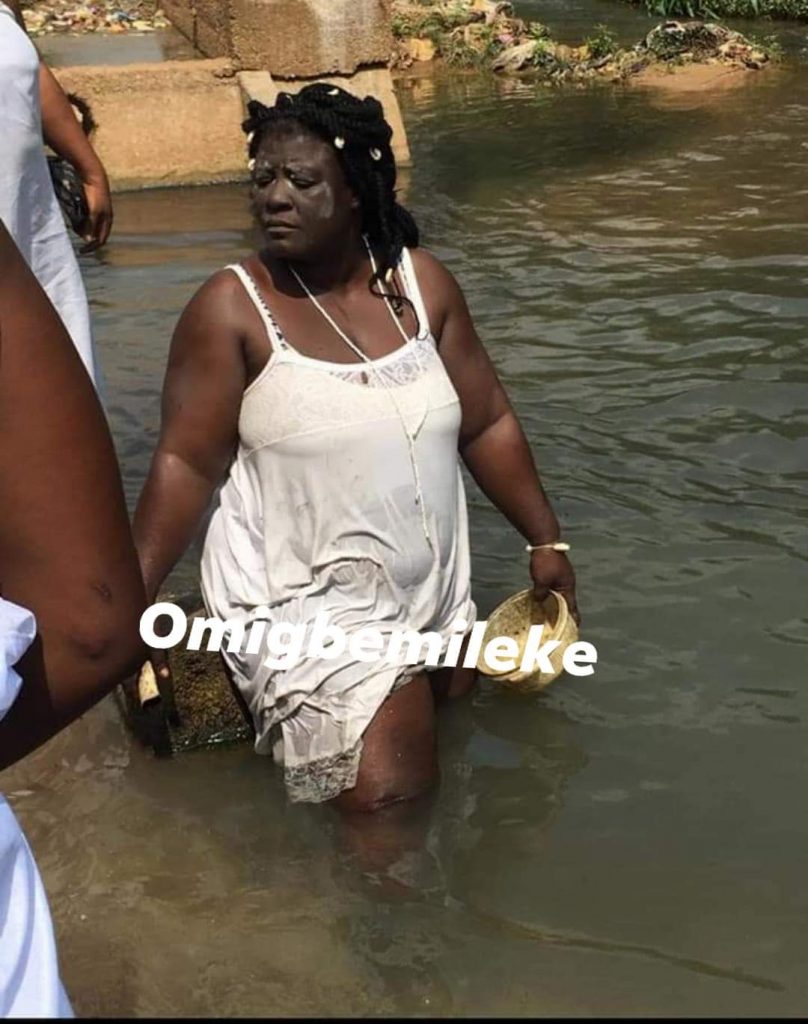 Can You Tell Us The Difference Between Yemoja, Olokun And Osun?

Well, when we talk about Yemoja, Olokun and Osun; if you look at it geographically some people tend to classify ‘Yemoja’ as ‘Yeye of river’. Olokun and Osun are universal. Although, Osun is the most celebrated of all the deities (Orisas) of water that we have but they are not the same. When you talk about Olokun, Olokun is one of the gods that people find it difficult to understand. Some people see Olokun as a male while some see Olokun as a female. But it is like Olokun is hermaphrodite in nature. Osun is a female and Yemoja is also a female that we refer to as ‘Yeye Omo Eja’. They all seek the goodness, fertility, prosperity, progress, peace and harmony of their worshippers but they are different in terms of their geographical location, food, taboo and their characteristics. Osun is very motherly and can condone some few things, but Olokun will not take any nonsense and he is very strict, possibly that is why a lot of people run away from Olokun. But to be precise, let me just say that they are all different.

You Seems To Have Knowledge Of (Egbe Orun) Heavenly Mates. Can You Tell Us What It Is All About And How Does A Person Knows He Or She Belongs To One?

‘Egbe’ is very important in one’s life. How far you will go in life is determined on ‘Egbe’ factor if not, you will always experience difficulty. So if you are ‘Elegbe, there is no point hiding anything just face it and do it. Embrace your destiny and your ‘Egbe’. ‘Egbe’ are not wicked, you  know some people do see their ‘Egbe’ but not constantly and it’s not good to see them because it is believed that when you see them you get carried away and it may lead to short life, because you enjoy their fellowship so much that this world get unattractive to you. ‘Egbe Orun’ is ‘heavenly mates’ and ‘Omo Omí’ is from marine kingdom. Actually ‘Egbe’ are the people that follow you; ‘Omo Omí’ means that you are from marine kingdom and ‘Egbe’ are the people that support you and your spiritual title of your own club. But when you are ‘Omo Omí, you are automatically ‘Elegbe’,  some people have ‘Egbe Ori akitan’; some of them meet in the river; beside the river, on top of a rock; under Iyalode tree or by the road side etc.

What Do You Think Government Can Do To Further Generate Income Through Our Culture And Tradition?

Well for government to generate income, basically the first thing the government needs to do is to encourage our children to accept our culture and tradition. They should not see it as something strange. What is ours should remain ours and should be respected as our own. The government should include traditional religion into the school curriculums or activities. It should be taught as subject like CRK and IRS. Government can generate income from our culture and tradition in many areas. Osun Osogbo generates a lot of income because we have tourists coming in and Eyo masquerade in Lagos state also generates a lot of income for Lagos State government. You know that it is a great source of income. Argungu fishing festival in the north also generates a lot of income for the state government and many others. The government should allow us or help us to propagate our religion. For instance, if we are having Egungun festival, let it be something that we can go to the stadium to celebrate as a national and international festival. We can also invite other countries to come and participate and look at how we practice magic of the Egungun. You know through that we will be encouraging a lot of people to come into the country. We have food preservation; food industry can also come in, and it will become a source of income for everybody including the government, private sector and others. The government should help us to embrace our religion and help us to propagate it and give us all the necessary support. The government should also fund the religion. We should all join hand together and see what we can do to make Isese better.