The number of confirmed coronavirus cases in Nigeria has risen from 36 to 40, according to the National Centre for Disease Control (NCDC).

According to the centre, three of the cases were recorded in Lagos and one in the federal capital territory (FCT).

The development makes the total number of COVID-19 cases recorded in the country on Monday alone 10.

Since Nigeria recorded its index case in February, this is the first time that 10 cases would be recorded in a day.

Nigeria also recorded its first death from the disease, which has spread across six states, on Monday.

The federal government has asked public servants to work from home in order to check the spread of coronavirus.

Amid the rising number of cases, the federal ministry of health called on China, where the virus first broke out, to lend technical support to Nigeria.

Also the minister of health, Osagie Ehanire has said some persons who have contracted coronavirus are hiding.

The minister said this at a press conference in Abuja on Monday.

He said the federal government has to act fast to tackle the spread of the virus in order not to experience a similar challenge with China and Italy – the worst hit countries in the coronavirus pandemic.

While China has recorded 81,093 cases with 3,270 deaths, Italy has recorded 63,937 cases with 6,077 deaths, according to Worldometer, a website that provides update on the virus casualty figures globally. 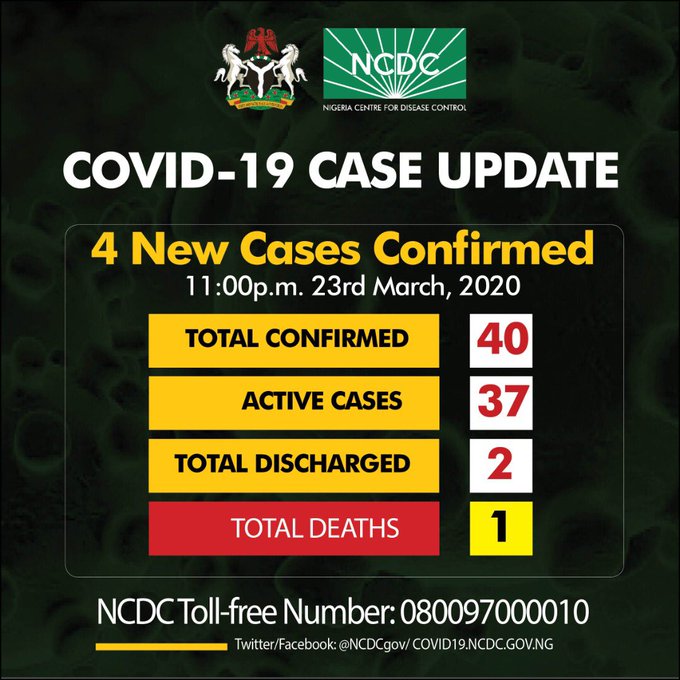 Ehanire said the country’s index case, an Italian man, had contact with 179 persons, adding that one of the persons had tested positive.

But both the Italian and the contact have recovered from the disease.

Enahire said the closure of the airports for international flights will stop the record of fresh cases in the country.

“In less than 48 hours, the Italian who came to Nigeria (index case) was identified. The contacts we found from him were 179. They were all traced and monitored. Out of the 179, one was positive and put in isolation with the Italian. Both were cured and discharged,” he said.

“If other cases had not come to Nigeria, that would have been the end of COVID19 in Nigeria. But other cases came in that were not part of the first one. That is why we are saying that you do not compare what we have now with what we have in China or Italy.

“If we do not act fast, we could be heading in something dangerous like that (in China and Italy). They now transmit among themselves.

“We have to get those who have been infected now. If we don’t, it may be a serious burden in the system. I am sure some are hiding, they will not report for whatever reason. Nobody will be arrested or asked to pay anything.

“Those who are returning now are Nigerians. With the closure of our airports, we will reduce inflow of new cases and deal with the ones we already have.”