Joe Biden has declared it is “clear” he has won the US presidential election as Donald Trump launches legal challenges with the result still in the balance.

On Wednesday night, Mr Biden was projected to have won Michigan and Wisconsin, putting him within touching distance of the White House.

The key states of Nevada and Georgia could be declaring in the next few hours – which means the next president of the United States could be known very shortly.

However, Mr Trump and his campaign have already claimed victory and are seeking to halt vote counts in battleground states through the courts, suggesting a turbulent few days to come.

Dozens of supporters of Donald Trump chanting “Stop the count!” descended on a ballot-tallying centre in Detroit on Wednesday night, while thousands of anti-Trump protesters demanding a complete vote count in the still-undecided presidential contest took to the streets in cities across the US. 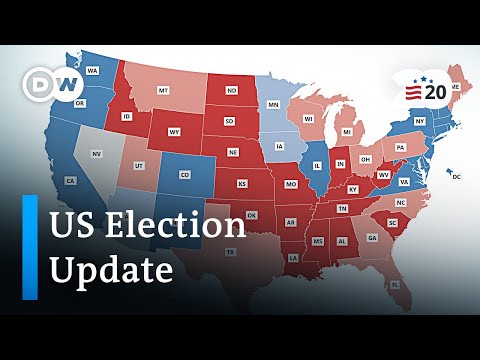 The protests come as the US election is on a knife-edge with Joe Biden leading his Republican rival – but the vote remains hotly contested.

Michigan has already been called for Mr Biden, but the count is not yet complete.

In New York City, thousands marched past boarded-up luxury stores on Manhattan’s Fifth Avenue, calling for every vote to be tallied.

The march was largely peaceful, though police said they made at least 20 arrests after a smaller group who were protesting over police misconduct blocked traffic and started fires.

The presidential race is on a knife-edge.

But Mr Trump has called it “a fraud on the American public”, claiming the Republicans won the vote and that Democrats are trying to “steal the election”.

In a monumental speech at the White House, Mr Trump disputed the results of the election – which are still unknown – as no president has before.

Mr Trump’s incendiary words look set to put America on course for an almighty battle over the result of the election.